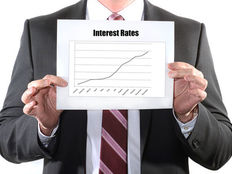 As widely expected, the U.S. Federal Reserve raised its benchmark interest rate to 0.75% from 0.50%, signaling an improving outlook for the U.S. economy.

U.S. Treasury yields and the dollar have rallied on the news largely because the Federal Reserve showed more optimism toward the economy than before. The Fed now expects three rate increases to occur next year, up from two previously. Worth noting, the central bank hiked rates two times this cycle, with the increases taking place one year apart.

For more on the history of this interest rate cycle, read Rising Interest Rates: Fed Ready for the Second Hike.

The Fed revised up its projections for GDP growth next year from 2% to 2.1%, and it said inflation expectations increased considerably on the back of a strong labor market. The unemployment rate fell to a nine-year low of 4.6% in November. The Federal Open Market Committee (FOMC) projects joblessness to sink further in 2017 to 4.5%.

Markets were 100% sure the Fed would act at this meeting, but they were still surprised by the Fed’s bullishness. The FOMC revised its projections across the board and said many of the participants did not consider any potentially positive fiscal effect on interest rates from President-elect Donald Trump’s expansionary policies. At the press conference, Fed Chair Janet Yellen said the FOMC may further revise its forecast but cautioned there was still a lot of uncertainty on the fiscal side. Yellen also said the U.S. economy does not need fiscal stimulus to reach full employment.

ETFs to Play the Hike

The most obvious ETF choice would be one with exposure to the dollar. PowerShares DB U.S. Dollar Index Bullish Fund (UUP B) has shot up 1.3% following the Fed’s decision. Against the euro, the greenback is close to reaching historic highs, trading below $1.05.

Another way to profit from higher interest rates is to short Treasury bonds, which have suffered lately. For example, Direxion Daily 7-10 Year Treasury Bear 3x Shares (TYO B) offers a leveraged alternative to bet on rising interest rates. (TYO B) has jumped more than 6% over the past month but has not yet recouped its year-to-date losses, which stand at about 5%.

For a full list of ETFs that could benefit from rising interest rates, take a look at our Rising Interest Rates market catalyst page.

Shorting gold represents a riskier alternative to benefiting from higher interest rates given the metal’s increased volatility. Also, gold is not directly tied to interest rates in the U.S. and has its own dynamic, but it usually suffers in a rising interest rate environment. UltraShort Gold (GLL A-) advanced 15% this month and rose nearly 3% on Wednesday following the Fed announcement. Year-to-date, the (GLL A-) is still down more than 20%.

ETFdb will have an in-depth analysis of the Federal Reserve interest rate hike decision in our upcoming January ETF Edge Newsletter – including what happened, which ETFs are impacted and how to navigate the rising rate environment in 2017. By signing up for ETF Edge, not only will you stay up to date with the Fed Reserve’s interest rate decisions, but also with major portfolio-moving developments around the world.

The Federal Reserve raised interest rates as broadly expected by the market. However, investors were surprised by the Fed’s upward revision of its projections, particularly its expectation of three interest rate hikes next year. As a result, the dollar rallied and government bonds fell.