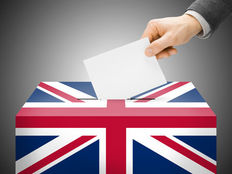 The Best ETFs to Play the Brexit Negotiations
Share

How the UK Election Affects Your Portfolio

The United Kingdom made headlines with the ‘Brexit’ decision, but the Conservative party’s failure in snap elections cast an even bigger cloud over the region.

While the ‘Brexit’ might be headed toward a softer landing, the political deadlock has increased political risk and taken a toll on the economy. Investors should be mindful of how this impacts their portfolio while potentially looking for opportunities amid the crisis.

What Happened in the UK Election?

The UK’s problems began when Prime Minister Theresa May, leader of the right wing Conservative party, decided to call a snap election two years earlier than necessary. At the time, it seemed like a great idea given her strong ratings in the polls and her party’s 20-point lead over Jeremy Corbyn and the left wing Labour party. The goal was to increase the Conservative majority to take on the upcoming ‘Brexit’ negotiations from a position of strength.

Cracks in the foundation began to surface shortly afterward. The Labour party ran a confident, youthful and forward-looking campaign, mirroring that of Canadian Prime Minister Justin Trudeau. Meanwhile, the Conservative party announced surprisingly unpopular social care reforms that it later reversed, which hurt the party’s image of strength and stability. Terrorist attacks further damaged the party’s credibility leading up to the elections.

The Labour party ended up gaining 31 new seats, bringing its total to 262, with a 40% share of votes. Despite losing her majority, Theresa May has refused to resign and has made a lot of concessions to rebuild a small majority. The Labour party is confident in building a minority government with the support of smaller parties, such as the Greens and the Scottish Nationalist Party, which could make passing new laws a lot more difficult.

Be sure to check our News section to keep track of the evolving situation.

What’s the Status of the ‘Brexit’?

The uncertainty from the UK elections couldn’t have come at a worse time with ‘Brexit’ negotiations beginning shortly. Prime Minister Theresa May’s original plan for a so-called ‘hard Brexit’ would have prioritized immigration control and involved the departure from the EU’s single market and customs union. But the strong showing among well-educated, liberal, pro-European voters could lead to a so-called ‘soft Brexit’ that would involve more moderate measures.

The new ‘Brexit’ will likely focus on continued access to the EU’s ‘single market’ rather than immigration control. The new business and economy-focused negotiations are designed to ensure that no extreme measures are taken that would jeopardize the country’s economic health as it breaks off. At the same time, the traditional transition period will likely be extended to the next general election in 2022 given the lack of political strength in either direction.

Liberal leaders are even pushing for a reversal of the ‘Brexit’ decision. Vince Cable – new leader of the Liberal Democrats – told TIME that an ‘exit from Brexit’ is possible, while other minority leaders suggest that the ‘leave campaign’ was built upon lies that are rapidly becoming apparent. Of course, any decision to reverse the ‘Brexit’ becomes increasingly unlikely the further that negotiations with the U.S. and EU proceed.

To find out more information on Brexit, read our article on UK’s Path to Leaving the EU.

How Will These Impact Your Portfolio?

The UK stock market has not reacted strongly in either direction to the surprise election. Since June 8, the FTSE 100 benchmark index fell roughly 1.35% compared to a modest 0.96% gain for all-cap world indexes. The decision to extend the ‘Brexit’ certainly helps to reduce the risk of a sudden shock, but the election demonstrated the divisiveness in the region’s leadership and increases the political risk associated with investments in the area.

The British pound has seen similar performance with a slight bias toward the upside. After falling sharply lower after the election, the cable briefly reached its highest level since the beginning of the year versus the U.S. dollar. The uncertainty leaves the currency susceptible to significant movements, which could have a dramatic impact on everything from the housing market to pension funds, depending upon the severity.

Aside from currency and equities, the indecision and lack of clarity surrounding the ‘Brexit’ process has already taken a toll on some measures of the economy. Consumer sentiment remains low as purchasing decisions are put off, while business confidence has struggled to regain any momentum after months of negative readings. This ongoing uncertainty could take a toll on all areas of the economy, especially if it’s at risk of being prolonged.

Check out the best ETFs to play the Brexit negotiations here.

Ideas for Hedging and Opportunities

Those holding UK investments might want to consider hedging or diversifying their portfolios given the increased political risk. For example, investors might want to consider currency-hedged funds as a way to hedge against the potential decline of the British pound relative to the U.S. dollar or euro. The WisdomTree United Kingdom Hedge Equity Fund (DXPS A) is a great example with broad holdings that are shielded from any currency risks.

On the other hand, investors might also want to look toward the UK for opportunities given greater potential volatility ahead. Investors might want to consider the iShares MSCI United Kingdom Small Cap ETF (EWUS B-) for directional bets given its greater volatility compared to large-cap stocks in the FTSE 100. Those confident in a smooth transition might go long, while those anticipating more problems might consider a short position.

Prime Minister Theresa May’s failure to keep a majority during the UK’s snap election has significantly increased the region’s political risk. Those with existing exposure might want to consider hedging against currency movements, while those looking for opportunities might want to consider small-cap funds with the greatest volatility.

Use ETFdb.com’s ETF Screener tool to filter through the entire ETF universe, including UK Equity ETFs, according to dozens of criteria such as asset class, sector, region, expense ratio and historical performance to find the best opportunities.