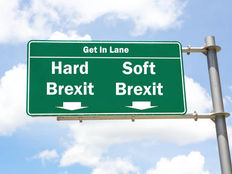 The Best ETFs to Play the Brexit Negotiations
Share

UK's Path to Leaving the EU

The United Kingdom officially filed divorce papers to leave the European Union on March 29, 2017 by triggering Article 50 of the Lisbon Treaty. This will launch two years of complex negotiations that will pit the United Kingdom’s need for a trade deal against the bloc’s view that Britain should not benefit from Brexit.

Implementing Article 50 gives the UK government two years to negotiate a new trade agreement with Brussels. Without it, the EU says, a formal break-up cannot take place. Brexit Secretary David Davis has previously stated he would like the UK to maintain tariff-free access to the single market, but that will be a tough sell given Downing Street’s stance on EU mobility rights and immigration.

Theresa May Commits to Hard Brexit

In a speech on January 17, Prime Minister May informed the public in her clearest statement yet that she will seek a hard exit from the EU in return for full control over immigration.

“What I am proposing cannot mean remaining in the single market,” Mrs. May said in prepared remarks at Lancaster House in London.

“We seek a new and equal partnership – between an independent, self-governing, global Britain and our friends and allies in the EU.”

However, Mrs. May revealed one important caveat: any final Brexit deal would require approval from both Houses of Parliament.

On Thursday, Members of Parliament (MPs) voted in favor of giving the Prime Minister the power to trigger Article 50 and begin negotiations for the UK to leave the European Union

While the economic consequences of Brexit are subject to great debate, the interim negotiation period is expected to be highly volatile. The Bank of England (BOE) isn’t taking any chances, and has already slashed interest rates to record lows and expanded its monthly bond purchase program to shelter against the economic blowback.

Though the UK economy has held relatively sturdy since the June 23 referendum, the BOE, International Monetary Fund and several other groups expect growth to slow significantly in the coming years. Prior to the Brexit vote, most think tanks, research institutes and non-governmental organizations expected the UK economy to weaken significantly after leaving the EU. They also forecast a spillover across the region, not to mention the political contagion. As a matter of fact, Italy might already be next to vote to leave the EU. Find out more here.

The British pound has been by far the biggest casualty of the Brexit vote, and currently finds itself trading near 31-year lows versus the dollar. At its lowest last October, the sterling reached 168-year lows against a basket of currencies.

How ETF Investors Can Prepare for Brexit

Brexit has sown the seeds of uncertainty throughout Europe and the global financial markets. Investors must therefore understand the new fundamental picture taking shape, and play to that reality.

In the current environment, ETF investors may have success playing inverse equity exposure products targeting the European market. Products such as the ProShares Short MSCI EAFE (EFZ C) immediately come to mind. EFZ is an inverse play of the MSCI EAFE Index, which has over 60% exposure to European equities. As Brexit and other political risks roil European markets, EFZ is a potentially strong hedge against instability.

IQLT offers nearly 20% exposure to UK equities, which have surged amid the Brexit hysteria. London’s benchmark FTSE 100 recently put together a 14-day winning streak on route to multiple record highs, as the promise of steady central bank stimulus and a plunging currency lifted the export-oriented index. To explore all ETFs with exposure to the UK, use our Country Exposure tool. To learn more about the entire Developed ETF universe, click here.

Another important theme in the present environment is policy divergence. As the BOE and other central banks continue to ease monetary policy while the U.S. Federal Reserve prepares to gradually raise interest rates, pursuing a currency-hedged strategy could also be effective in containing a surging U.S. dollar. The WisdomTree International Hedged Quality Dividend Growth Fund (IHDG B+) fits that purpose.

ETF investors should also keep tabs on volatility and inverse volatility products that may be prone to wild swings due to political uncertainty on both sides of the Atlantic. The iPath S&P 500 VIX Short-Term Futures ETN (VXX A-) could provide a good short-term play should Brexit-induced volatility enter the U.S. stock market. Conversely, an extension of the Donald Trump rally will render volatility obsolete, making the VelocityShares Daily Inverse VIX Short-Term ETN (XIV B+) a potentially profitable inverse play.

Read The Best ETFs to Play the Brexit Vote for ETFs that may underperform or outperform as Brexit negotiations continue.

ETFdb.com has ETF investing guides and other ebooks to help you navigate the investing landscape using ETFs. Sign up to ETFdb Pro to get access to all the PDFs located on our ETF Guides page.

The UK Parliament’s decision is a major step towards Britain leaving the European Union and keeps in tact Theresa May’s provisional timetable of triggering Article 50 by the end of March 2017, setting motion two years of negotiations with the EU over the terms of the UK’s exit. Investors should prepare for a bumpy ride as Brexit continues to impact the financial markets over the next two years.

For more ETFs news, subscribe to our free newsletter.