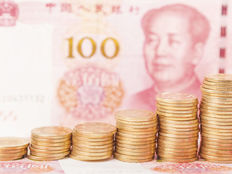 The Yuan: Pegged or Not, That Is the Question

China’s yuan policy has caused quite the stir in recent times. In August 2015, it was at the centre of a global financial storm culminating in the Aug. 25 “Black Monday” selloff that wiped trillions from the global exchanges.

As the People’s Bank of China (PBOC) expands its efforts to internationalize its currency and stem its depreciation, market participants are once again pondering the status of the yuan as a pegged currency.

The PBOC provided some clarity in December 2015 when it unveiled the China Foreign Exchange Trade System (CFETS) RMB Index, a gauge that monitors the yuan’s movement against a basket of currencies. The new tool sent a clear signal that the U.S. dollar was no longer the only game in town, and that policymakers were monitoring its rapid appreciation.

Initially, the CFETS RMB Index measured the yuan against a basket of 13 currencies, with the U.S. dollar having the highest weighting at 26.40%. However, it didn’t take long for the PBOC to amend the RMB Index. Faced with a surging U.S. dollar and a more volatile yuan, the central bank nearly doubled the number of foreign currencies represented in the RMB Index. Starting January 1, 2017, the number of currencies in the basket was increased to 24 from 13.

Investors looking to gain exposure to the renminbi without actually trading the currency are encouraged to explore RMB Chinese Yuan ETFs.

The new currency pegging system was far from spontaneous. Not only did it follow from several decades of central bank intervention (see Table below), it responded to the growing challenges posed by a surging U.S. dollar. By the time the index was unveiled, the U.S. dollar had gained more than 20% against a basket of other major currencies during the previous 18 months. Virtually all the gains came in response to a more hawkish Federal Reserve, which had not only tapered its record bond purchases all the way to zero, but had also introduced its first interest rate increase in nearly a decade.

The Federal Reserve raised interest rates in December for only the second time in a decade and signaled a faster pace of tightening over the next two years. The election of Donald Trump as U.S. President also fanned inflation expectations, which should keep the central bank on course to continue normalizing monetary policy over the forecast period. The dollar index, which tracks the greenback against a basket of six other major currencies excluding the yuan renminbi, recently traded near 14-year highs. As Fed policy continues to diverge from the rest of the pack, the dollar’s ascent has likely only just begun.

Yuan Renminbi: A Timeline of Events

The yuan has been described by market participants as having a “dirty float,” likely due to repeated intervention from the PBOC. That’s why a growing number of prominent voices expect Beijing to de-peg the yuan as soon as 2017. They cite capital flight from the world’s second-largest economy as the main catalyst behind such a dramatic shift. Chinese policymakers have struggled to stem capital outflows as a sputtering domestic economy spooks investors out of yuan-denominated assets. As Chinese foreign exchange reserves continue to decline, they risk falling below the International Monetary Fund’s minimum threshold. Domestic households and businesses have taken notice and are quickly diversifying their savings elsewhere, parking their money in real estate, bitcoin and everything in between.

The CFETS RMB Index has also been creeping down, as its largest constituent – the U.S. dollar – continues to outperform the market. The yuan’s fix will naturally become weaker as the dollar extends its winning streak, also impacting other currencies in the basket.

Despite these underlying issues, China remains a premier emerging market that offers plenty of upsides. Investors looking to gain exposure to Chinese equities while minimizing currency exposure risk have several choices available to them, including the CSOP MSCI China A International Hedged ETX (CNHX ) and the Deutsche X-trackers CSI 300 China A-Shares Hedged Equity ETF (ASHX ). These two ETFs provide hedged exposure to Chinese equities at a critical time in the country’s political juncture. To compare these investment vehicles, use our ETF Comparison tool.

Investors can also find out more on how to gain exposure to China without the currency risk here.

For a full list of ETFs with exposure to China, use ETFdb.com’s Country Exposure tool.

Despite accusations of widespread currency manipulation, the PBOC appears to have a plan for making the yuan renminbi an international currency. The SDR ticket was the first of what’s likely to be many breakthroughs toward that goal.

For further news and analysis on the subject of yuan devaluation, come back to our Yuan Devaluation category page on a regular basis.