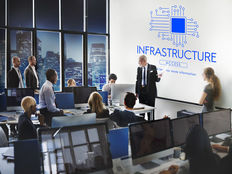 Capitalizing on the Planned Surge in Global Infrastructure Spending

For any modern society to function effectively, a stable infrastructure framework is necessary. The need to revitalize transportation grids, telecommunications networks, power supplies and other essential facilities is a pressing concern not just for emerging markets, but advanced industrialized societies as well.

That’s why infrastructure revitalization was at the center of the 2016 United States presidential race, and why President Donald Trump committed $1 trillion in fiscal spending to rebuild America.

Investors looking to cash in on Trump’s plan should realize there are many like it all over the world. Infrastructure spending is a massive business, and one that could provide lucrative rewards at a time when nations are ramping up modernization efforts to cope with the challenges of a growing population.

Demand for Infrastructure on the Rise

From China to the U.S., demand for infrastructure is surging as nations seek to curb underinvestment and facilitate an ever-growing population. These factors are expected to make infrastructure spending a $40 trillion industry by 2030, predominantly in the form of government initiatives, according to VanEck Vectors.

For emerging markets in Asia and Latin America, the push toward urbanization is considered a major demand driver for infrastructure spending. Countries like China, India and other parts of developing Asia are at the cusp of a major infrastructure overhaul. Japan, along with the Asian Development Bank, has already committed hundreds of billions of dollars in infrastructure programs in the developing Asia region. More economically advanced Europe is also expected to see infrastructure investment return to pre-crisis levels, as nations prioritize essential services.

Research from McKinsey Global Institute shows infrastructure spending accounted for 3.5% of global GDP between 1992 and 2013. During this period, China spent an average of 8.6% of GDP on infrastructure, more than the United States and Europe combined. Against this backdrop, it’s easy to see why more developed nations need to play catch up, and why they are quickly prioritizing investment efforts.

In the case of the United States, Trump’s infrastructure plan promises an investment blitz that pivots away from “bureaucracies” and toward “transactions.” This essentially means private companies will play a bigger role in carrying out the fiscal policy-led initiatives. Trump’s plan also promises huge tax credits to incentivize private construction and ownership of infrastructure. In theory, it will reduce the burden on taxpayers and stimulate economic growth in the form of jobs, business investment and increased profitability.

Read Infrastructure ETFs are Likely to Flourish Under Trump to find out why the infrastructure sector will benefit if Trump carries through with his election promises.

Benefits and Drawbacks of Infrastructure Spending

There’s a reason so many nations have put off infrastructure spending for so long: they’re expensive, time consuming and wrought with regulatory hurdles. Combined with the fact that most initiatives are carried out by governments, infrastructure projects often get muddled by bureaucratic bottlenecks and politics. Large development projects, like the ones being proposed all over the world, also face higher construction risks and demand uncertainty. These factors may lead to large budget deficits without the reciprocal benefit.

Despite these drawbacks, governments and businesses see plenty of upside in infrastructure spending. Firstly, large development projects can stimulate the economy by way of jobs, higher growth and other economic multipliers. Secondly, infrastructure spending is also considered necessary for nations and regions in need of replacing outdated essential facilities or accommodating a growing population. Finally, infrastructure spending has been shown to raise the value of public real assets, thereby lowering production costs for the private industry. Therefore, maintaining and preserving public infrastructure has a long-term positive impact on businesses that use it.

Reasons for Allocating Global Infrastructure in Your Investment Portfolio

Since infrastructure can be defined as the essential facilities and services on which a society depends, its demand will continue to grow in the face of urbanization, population growth and the need for improvement. Therefore, ETF investors should strongly consider an allocation of global infrastructure in their portfolio, both at the industry level and the asset level.

At the industry level, infrastructure investments in long-lived assets that have steady cash flow, exhibit inelastic demand, benefit from regulatory advantages and are protected by high barriers to entry are best suited to generate strong returns. These features protect returns by ensuring steady demand for infrastructure over long periods, as well as favorable tax advantages.

A quick search of the ETF Database Infrastructure ETF list reveals several exchange-traded funds that meet these investment criteria, such as (IGF A), (GII A), (EMIF B) and (TOLZ A).

Infrastructure ETFs also provide protection when the Federal Reserve begins to steadily raise interest rates, like it is doing now. The Federal Reserve is the only major central bank on par to normalize monetary policy. As such, it will continue to diverge from the rest of the pack over the next 12 months. This should facilitate a continued steady rise in the federal funds rate and the U.S. dollar. A more expensive U.S. currency could potentially impact multinationals doing business overseas, although this effect isn’t limited to infrastructure. To track the U.S. central bank’s latest moves, refer to the Federal Reserve Interest Rate Decision table.

As interest rates shift from a rising to a more flattened curve environment, infrastructure assets have the potential to outperform other asset classes. That’s because a flatter rate curve environment means longer-term rates are expected to be more in line with short-term rates, a scenario that reduces bond prices to compensate for rising longer-term rates. A higher rate environment is also indicative of a stronger economy in which equity markets typically outperform bond markets. As investors sell bond-like assets for equity-based investments, exposure to global infrastructure shares can be highly beneficial.

For many investors, the election of Donald Trump has pushed infrastructure to the top of the priority list. High demand for infrastructure projects in both advanced and industrialized societies strongly suggests that global infrastructure spending will provide investors with strong risk-adjusted returns for the foreseeable future.

A Tale of Two Markets