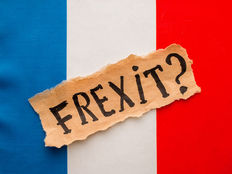 The Best ETFs to Play the French Election
Share

Will France Leave the EU Next?

The United Kingdom’s decision to leave the European Union (EU) was a watershed moment in recent political history. In its wake, a wave of ultra-nationalist parties with the same ambitions have swept through Europe in hopes of reclaiming national identity and distancing themselves from Brussels.

The tide of anti-EU sentiment recently arrived on France’s shores after the National Front’s Marine Le Pen advanced to the second round of the presidential elections on April 23, beating out Republican and communist-backed candidates.

Le Pen finished runner-up in the first round of the French election, trailing independent centrist Emmanuel Macron by a few percentage points. Both will square off in the second-round runoff election on May 7. Under the French system, a candidate must secure an absolute majority to win the presidency. Should no candidate obtain a majority mandate in the first round, a runoff election is held two weeks later between the top two vote-getters.

For a list of ETFs to play the French elections, visit our French Elections 2017 market catalyst page.

There was considerable uncertainty in the financial markets in the lead up to the first round of voting, as investors weighed the probability of two anti-EU candidates advancing to the runoff. Ultra-leftist Jean-Luc Melenchon, who surged in the public opinion polls in April, also had strong anti-EU tendencies. Melenchon finished fourth on Sunday.

With Melenchon out of the picture, investors can go back to focusing on Le Pen, who is widely regarded as the biggest risk to the Eurozone’s stability. The far-right leader has vowed to reintroduce the franc and hold Brexit-style referendums on both the euro and the EU. Although polls projected Le Pen advancing to the second round, investors breathed a sigh of relief when independent centrist Emmanuel Macron topped the leaderboard with nearly 24% of the popular vote.

Unlike Le Pen, Macron is a strong proponent of pan-European integration. He has vowed to make France more business friendly by lowering corporate taxes, keeping the legal workweek at 35 hours and implementing €50 billion in public investments over the next five years. Macron’s platform make him the easy favorite among financial market participants, who value political and economic stability more than anything.

That was evident in the immediate aftermath of the April 23 election, where the euro briefly surged 2% against the U.S. dollar. The common currency has a lot at stake in the French election. A victory for Le Pen would call into question the euro itself, setting the stage for an existential crisis that could lead to a Brexit-style selloff of the shared currency.

The United Kingdom filed divorce papers from the European Union on March 29, 2017. Read UK’s Path to Leaving the EU to find out more.

Frexit In the Making?

Le Pen’s strong anti-EU stance has led market participants to conclude that France is headed out of the single market should the National Front leader win on May 7. While Le Pen’s victory is necessary for the so-called Frexit to begin, her election alone is insufficient in pulling France out of the EU.

France’s Constitution makes Frexit a messy and painstakingly long ordeal. Unlike the UK, France’s EU membership is codified in the country’s constitution. Frexit would therefore require majority support from both the National Assembly and the Senate. Le Pen would need to clear major political hurdles before taking Frexit to a referendum. Even then, 60% of voters would need to back Frexit for it to happen. This is an especially tall order, given that the UK just barely passed Brexit after decades of public debate on the matter. Frexit hasn’t been on the front burner long enough to sway French voters away from their pan-European ideals.

As it currently stands, Macron is widely expected to beat Le Pen by a margin of 20-plus points, according to a snap poll released Sunday. Although analysts warn that we shouldn’t discount Le Pen’s chances, the probability of Frexit is remote at the time of writing.

If France Leaves the EU

Although the possibility of Frexit appears to be slim at the moment, Le Pen’s advance to the second round is a crucial step in favor of the anti-EU party. The rise of populism throughout Europe and the United States also suggests it would be unwise to rule out Le Pen’s chances of winning the election and beginning her campaign for exiting the EU.

France’s exit from the EU would have a similar impact as the Brexit vote, although the long-term implications would be much more severe. Unlike the UK, France’s economy is intricately tied to the euro. Le Pen is not only vowing to exit the EU, but the single currency market as well. Brussels will therefore have contagion on two fronts, which could signal the death knell for the pan-European project.

If France Stays in the EU

France’s continued membership of the EU and euro would likely pour cold water on nationalist uprisings throughout the region. This is crucial for the Europhiles, who are bracing for upcoming German elections and the potential for a snap election in Italy later this year.

France maintaining ties to the EU would also bring calm to the financial markets and encourage investors to continue buying regional stocks. Europe’s economic momentum has gathered pace in recent quarters, a sign that central bank stimulus and rebounding commodity prices were supporting growth. With Frexit fears in the rear-view mirror, the EU would be able its long path to recovery.

Italy is mulling over a snap election later this year following the country’s December referendum on constitutional reform. Bookmark our Italy EU Exit market catalyst page for ETFs to play if Italy stays or leaves the EU in the coming years.

ETFs That Will Outperform If France Stays in the EU

Investors will likely cheer any successful effort to avoid Frexit and keep France a member of the EU. The following ETFs stand to benefit the most from France’s continued membership of the single market.

The French stock market has enjoyed a strong 2017 along with its other European peers. Political stability in the form of France’s continued EU membership will boost appetite for domestic equities, making EWQ a strong candidate for future growth.

The Eurozone’s benchmark stock index has plenty to gain should France secure long-term membership of the single market. With Le Pen out of the picture, investors can breathe a sigh of relief that the 19-member Eurozone will remain intact – at least for now. Political stability of this magnitude will continue to drive heavy traffic into euro area equities.

Investors looking for broad exposure to the Eurozone in general, and France in particular, will find plenty of opportunity in FEUZ, which is likely to outperform the broader market in the event Frexit is averted. The ETF provides overall exposure to European equities, with French companies making up about 20% of the fund. Although the fund is considered medium-risk, it has the potential to thrive following a high-profile political event.

For more ETFs with exposure to France, use ETFdb.com’s Country Exposure tool.

ETFs That Will Underperform If France Leaves the EU

The following list of ETFs are likely to underperform in the event France’s Eurosceptic movement prevails in exiting the EU.

The euro will be one of the biggest casualties of Frexit. In fact, investors can expect the euro’s selloff to be swift and painful. The drop will happen long before France is officially out of the EU. As we’ve seen repeatedly, anticipation can lead to dramatic price movements in the market. In the case of the euro, a victory for Le Pen on May 7 could spell doom.

As Frexit tanks the euro, the last thing you want is leveraged exposure to the common currency. Given the performance of the euro as of late, leveraged positions haven’t been very popular. Their popularity will likely plummet further should France find itself on the path out of the EU.

U.S. investors may have grown accustomed to low volatility over the past 12 months. All of that would change if Frexit came true. Like Brexit before it, France’s decision to leave the EU would trigger a global equities selloff, leading the VIX Volatility Index sharply higher. Inverse exposure to the VIX via the XIV would significantly underperform the market.

By signing up for the ETF Edge, not only will you stay updated on upcoming geopolitical events such as the French elections, but also on major portfolio-moving developments around the world.

At the time of writing, Frexit risks appear to be remote. However, that could change in two weeks from now should Marine Le Pen shock the world by securing the French presidency.