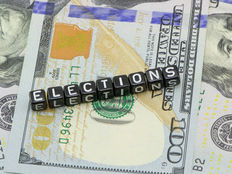 As election uncertainty looms, investors will be looking for defensive plays in the ETF market to protect against volatility. While defensive sectors are necessary, they may prove insufficient over the long haul as the outcome of the election plays out over many months and even years. As the U.S. presidential race has no doubt conveyed, the financial markets are highly sensitive to the political process.

The 2016 U.S. presidential race has exposed which sectors of the market can be negatively impacted by election year posturing. For example, healthcare and biotechnology ETFs have experienced greater volatility in the wake of Democratic nominee Hillary Clinton’s campaign to rein in drug costs. On the other hand, the race for the White House has been a boon to the aerospace and defense sector, as both Clinton and GOP candidate Donald Trump have promised to bolster homeland security. Rather than speculate over which candidate will win, investors can boost their returns by entering into volatility-resilient ETFs that have a track record of solid returns regardless of the political climate.

The motivation behind investing in so-called volatility-resilient ETFs becomes clear when one considers previous election cycles. The election of Barack Obama to President on November 4, 2008 was supposed to lift ETFs tied to clean energy, healthcare and construction. After all, Mr. Obama vowed to tackle climate change, reform America’s health system and eradicate systemic risks from the housing market. While Mr. Obama’s performance on these and other policy issues is subject to debate, the market’s response has been lukewarm. This is especially the case for clean energy, a sector that was tipped to outperform the broader market with the arrival of a more environmentally friendly president.

The SPDR S&P 500 ETF (SPY A) has gained approximately 145% in the eight years since Barack Obama was elected President. By comparison, the VanEck Vectors Global Alternative Energy ETF (GEX C+), which provides exposure to alternative energy industries, has declined nearly 30% over the same period. You can learn more about clean energy investments by utilizing our ETF Screener tool, which allows you to filter through the entire ETF universe.

Clean energy has lagged the market for several reasons, including the U.S. shale oil boom, which began in Texas in 2005 and accelerated under Obama’s presidency. Paradoxically, oil’s massive plunge since mid-2014 has also weakened the appeal of cleantech because of cheap oil and natural gas prices. While there have been significant developments in the cleantech market, traditional sources of energy continue to dominate. Clean energy is still forecast to become a multi-trillion-dollar industry, but reaching that milestone will likely occur in stops and starts over a longer time horizon than the industry bulls previously believed.

The clean energy example above clearly demonstrates that portfolio allocation should not be linked to who is in the White House. While history has demonstrated that stock market returns are typically much stronger under Democrats than Republicans, this does not simply boil down to who is in the White House. That’s because presidents often spend considerable time dealing with decisions made by previous administrations.

In reality, stock markets are more likely to be influenced by several interrelated fundamental forces that include economic growth, global macro flows, investor sentiment and monetary policy. Monetary policy has played a more pivotal role in the direction of equities since the 2008 financial crisis, leading to speculation that the market has grown too reliant on low interest rates and quantitative easing. Against this backdrop, the following table illustrates the ETF themes investors should consider regardless of the election results.

Infrastructure spending is a major catalyst of most major economies. Demand for roads, transportation, communications and utilities is also less likely to be impacted by changes in the business cycle. For this reason, utilities consistently overperform during periods of economic and financial turbulence. Both advanced and emerging nations face myriad challenges including population growth, overcapacity in large urban centers and the need to modernize key sectors of the economy – all of which demand continued infrastructure spending both at the state and private level. With respect to the U.S. elections, both presidential candidates have vowed to boost infrastructure spending, a strong indicator the iShares Global Infrastructure ETF (IGF A) will maintain its steady expansion regardless of the outcome. This is particularly helpful for risk-averse investors seeking long-term growth.

Volatility is a mean-reverting phenomenon in the global financial markets. While this creates plenty of speculative plays that can boost short-term gains, it can also expose investors to significant downside risk. Low-volatility strategies are already exposed to markets with potentially less risk, making them well positioned to deal with fluctuations that characterize a high-profile election and its aftermath. The emerging market component, like the one offered in the MSCI Emerging Markets Minimum Volatility ETF (EEMV A), provides exposure to fast-growing economies that have long attracted yield-seeking investors. Emerging market exposure is widely considered to be an essential component of any well-balanced portfolio.

The year 2016 signaled the arrival of a new bull market for gold and other precious metals, as weak global growth, risk-off sentiment and ultra-loose monetary policies boosted demand for bullion and other safe-haven investments. These trends are unlikely to change anytime soon, making SPDR Gold Shares (GLD A-) an excellent addition to investors’ portfolios. With the exception of the U.S. Federal Reserve, central banks around the world are in the process of either easing monetary policy further or keeping their highly accommodative programs intact. A weak global environment characterized by volatility and uncertainty make gold a critical play for risk-off investors and others looking to diversify into precious metals.

Aerospace and defense have steadily outperformed the market this year. With military and homeland security firmly on the agenda for both presidential candidates, this sector is expected to perform well regardless of who is in the Oval Office. Aerospace and defense also extends far beyond traditional military equipment to include cybersecurity, counterterrorism and the development and manufacturing of high-tech equipment. The (XAR A-) ETF has gained around 130% since its inception in July 2011 and is well poised to counter any election-related volatility.

While the political process will play a major role in influencing the financial markets, smart ETF plays that leverage gold, emerging markets, high dividends and defensive sectors are primed to outperform regardless of who wins the White House. If you are still not convinced with our picks and analysis, then take a look at the If Hillary Clinton Wins and If Donald Trump Wins articles for an in-depth breakdown of ETF themes that will outperform and underperform when either candidate wins the election November 8, 2016.