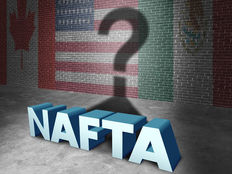 The Upcoming NAFTA Renegotiation and Its Impact on Equity Markets

Efforts to renegotiate the North American Free Trade Agreement (NAFTA) are officially underway, with officials setting an aggressive timeline for resolution. Naturally, investors are looking to determine how the negotiation process will impact their portfolios.

For all the debate it inspires, NAFTA has profoundly reshaped North American trade. Over its 23-year history, trade between the United States, Canada and Mexico has quadrupled, leading to a far more integrated North American economy. In the process, NAFTA achieved its primary objective of integrating Mexico’s emerging economy with those of its northern industrialized peers. Even in the U.S., a nation that is often critical of NAFTA, overall employment, foreign direct investment (FDI) and GDP have expanded since 1994.

Although NAFTA has largely benefited all countries involved, it has led to a widening of the U.S. merchandise trade deficit with its northern and southern neighbors. This, combined with the loss of manufacturing jobs, prompted U.S. President Donald Trump to call for a complete rewrite of the landmark agreement. This means the Trump administration is looking for much more than a simple tweak of the trade rules and more of a complete overhaul on issues ranging from dispute settlement to rules of origin.

Renegotiating NAFTA also has practical benefits, such as ensuring that trade rules accurately reflect the evolution of the global economy over the past two decades. Adopting a common framework on digital trade is on the agenda, but it will attract far less controversy than the areas highlighted above.

Investors with exposure to North American equities have the most to gain or lose from the NAFTA renegotiation. This is especially true for holders of exchange-traded funds (ETFs). There are currently more than 1,000 North American ETFs traded in the U.S. markets with total assets under management exceeding $2.2 trillion.

ETFs with exposure to finance, telecommunications, natural resources and agriculture could be the most impacted by the new NAFTA deal, as these are the main sectors being targeted by the Trump administration. The largest ETF in the group, the SPDR S&P 500 ETF Trust (SPY A), will also be impacted both by the negotiation and the final deal, as the large-cap index has broad exposure to the U.S. economy.

Mexico ETFs are also expected to face volatility as the negotiations heat up. In fact, recent evidence suggests that Mexican equity markets have already been affected by negative rhetoric concerning Mexico.

The iShares MSCI Mexico Capped ETF (EWW A), the largest exchange-traded fund tracking Mexican stocks, was negatively correlated to President Trump’s controversial comments regarding Mexico and his plan to erect a massive border wall with his southern neighbor. This correlation stretches all the way back to last year, when the EWW fell 10.3%. By comparison, the MSCI Emerging Markets Index (EEM A-) gained nearly 11%. Since the start of August, EEW has lost around $84 million in assets, a sign that investors are growing weary over NAFTA. For a more comprehensive comparison between EEM and EWW, check out the ETFdb.com Head-To-Head Comparison tool.

In an increasingly globalized economy, protectionism is usually met with resistance by investors. Any deal that limits the movement of trade or reduces the integration of all three economies could negatively impact ETFs with broad exposure to North American stock markets.

What Each Country Wants to Take Away From the NAFTA Renegotiation

Although it is generally believed that Canada and Mexico want to limit changes to the existing NAFTA protocol, the Trump administration’s hardline approach will prompt contentious dialogue on several fronts. President Trump has already targeted Canada’s softwood lumber and dairy industries, and could go after Mexican agricultural subsidies. The U.S. also wants more access to its neighbors’ banking and telecommunications industries, something the original NAFTA deal failed to accomplish.

Below is a list of each country’s trade goals. As you can see, many of the objectives are shared by all three NAFTA members. The main differences are Washington’s desire to eliminate or reduce the trade deficit, tighten rules of origin and prevent currency manipulation.

The first round of NAFTA negotiations concluded in Washington on August 20. Mexico will play host to round two of negotiations September 1-5. Equity investors can expect negotiations to resume well into next year, as officials continue to target a final deal before the Mexican election in July 2018.

NAFTA negotiations are just getting started. To keep track of the latest developments from an ETF perspective, subscribe to our free newsletter.

The first half rally in small caps doesn’t appear to be running out of steam, which could...

Why Quality Matters with Small Caps

Factor leadership is constantly changing, but one of the great things about the quality factor is...

The ALPS Clean Energy ETF (ACES) and other renewable energy funds languished in the first half of...