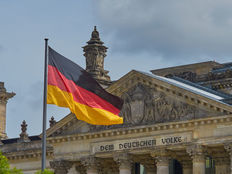 The Best ETFs to Play the German Elections
Share

What's Next for Germany Post-Elections?

German Chancellor Angela Merkel has secured her fourth term in office after her conservative coalition staved off a surge in support for the far-right. The result, which was largely in line with the polls, suggests that another ‘grand coalition’ between the CDU/CSU and left-leaning SPD is in the works.

Chancellor Merkel, who has been a mainstay in German politics for the past 12 years, has been given the mandate to form the next government. In Sunday’s election, her party secured some 33% of the vote, enough to secure more than a third of the seats in the Bundestag. As predicted, Martin Schulz’s Social Democrats (SPD) came in second with 20.5%.

The real surprise came from the far-right camp after Alternative for Germany (AfD) earned 12.6% of the popular vote. That’s enough for 93 seats, marking the first time in over 50 years a far-right party has made it to parliament.

AfD is shaking up Germany’s political scene. The anti-immigration, anti-European Union party represents the German manifestation of right-wing populism sweeping across the continent in the wake of an escalating migrant crisis.

The market-friendly Free Democrat Party (FDP), Merkel’s long-time ally, secured fourth place with 10.7% of the vote. Left-wing Die Linke and the Greens were neck-and-neck at around 9% each.

How will the German election impact the Eurozone and your investment portfolio? Read our latest article on the subject here.

Impact of Election on Germany’s Economy and Europe’s Future

The result of Sunday’s election suggests Merkel’s alliance must rely heavily on opposition parties to form government. Schulz has already ruled out his Social Democrats re-joining the “grand coalition.” They will instead head the opposition. Although a coalition with the FDP is likely a given, Merkel needs more coalition partners to form government .She has already vowed to listen to AfD voters with the intent of winning them back in the future.

Merkel’s victory, no matter how small, will be welcomed by investors, who seek stability above all else. Although the election result is unlikely to have a major impact on the German economy in the short term, it could dictate the future of European integration. It is unclear how this will play out now that the CDU/CSU must consider external demands from both sides of the political aisle.

The rise of AfD, like the advances of the Dutch Party for Freedom and France’s National Front, will likely translate into greater momentum for the populist movement in next year’s elections. Italy, Ireland, Sweden, Russia, Latvia and the Czech Republic are all scheduled to head to the polls in 2018.

In the meantime, Germany will continue to benefit from a synchronized global recovery, which is feeding into euro area prosperity and higher export demand.

With the German economic recovery on track, exchange-traded funds (ETFs) with exposure to the world’s fourth-largest economy will remain in vogue.

This backdrop makes the iShares MSCI German Index Fund (EWG B) an immediately attractive option for ETF investors. The index is up more than 20% year-to-date and has exposure to some of Germany’s biggest companies, including DAX 30 giants Bayer AG, SAP, Daimler AG (DAI:DAX), Siemens, Allianz and BASF. This export-bend is a strong value proposition for investors looking to capitalize on the global rebound.

The WisdomTree Germany Hedged Equity Fund (DXGE B) also provides exposure to German equities while hedging exposure to fluctuations in the volatile euro. Europe’s common currency has made huge gains this year, but could be prone to pullbacks should the U.S. dollar reassert its dominance in the wake of multiple interest rate increases. A stronger euro could also negatively influence exporters, which places more primacy on the need to hedge against its fluctuations.

The First Trust Germany AlphaDEX Fund (FGM C) is a multi-cap index that provides seamless access to German stocks with promising growth factors such as recent price appreciation, sales-to-price ratio and annual sales growth. Investors willing to pay a premium for high-quality German stocks will find the FGM a strong value proposition in the post-election environment.

Merkel’s fourth mandate to form government differs markedly from the previous election cycles. The surge of the far-right presents both opportunities and obstacles for Europe’s largest economy and its future role as de facto head of the Eurozone and EU. The AfD reflects real grievances of a large swathe of the German voter base that Merkel must address if she seeks to bring the alt-right within her sphere of influence.

For more ETF news and analysis, sign up for our free newsletter.