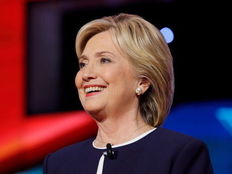 Why Hillary Is Big on Alternative Energy?

For Americans, the two major candidates this election season couldn’t have more polarizing views on almost every topic and policy area. One significant difference is their platforms on energy policy.

Hillary’s energy plans offer a clean, renewable-energy future through various subsidies, grants and continuation of fossil fuel regulation. If she is successful in winning the presidency and implementing her plans, investors in the energy sector could be looking at a different set of winners and losers.

Throughout her campaign, Clinton has supported various renewable energy sources, climate change proposals, carbon pricing, clean energy jobs and various energy efficiency measures. Hillary has already vowed to keep the Clean Power Plan and fight any attempts to dismantle it by Congress. The bill – enacted under President Obama – was designed to cut carbon emissions from the power sector by 32%, by 2030. The end result of the plan has been the mass closure of various coal-burning plants across the United States. In addition to keeping the Clean Power Plan, Hillary also intends to give the EPA more wiggle room in enforcing climate and energy pollution laws. The presidential nominee also pledged to keep the United States in the Paris Climate Agreement.

Building on the Clean Power Plan, Clinton has put forth her own set of aggressive climate and renewable initiatives. Looking to have renewables comprise 25% of the total U.S. energy mix by 2025, Clinton plans on installing more than 500 million solar panels by the end of her second term. Various grants and subsidies will help to grow solar adoption. Clinton also plans on adding various tax breaks and “dangling carrots” for wind and other emerging renewable technologies. Those tax breaks will come from cutting the current breaks for fracking and fossil fuel producers.

Finally, Clinton’s biggest energy policy piece stems from her $60 billion Clean Energy Challenge. The program will partner with states, cities and rural communities to cut carbon pollution and expand clean energy. The idea is to revitalize communities that have been traditionally very fossil fuel friendly, like the coal mining towns in West Virginia. Clinton hopes to turn these places into clean energy super-hubs of manufacturing.

With such a huge piece of her energy plan focusing on renewables and reducing greenhouse gases, a Clinton win could mean great things for stocks invested in the sector. There would certainly be increased demand for their products, which should translate into higher revenues, profits and, ultimately, higher share prices.

With $87 million in assets, the biggest ETF and most popular fund is the PowerShares WilderHill Clean Energy Portfolio (PBW B-). PBW tracks a basket of renewable and alternative energy sources and firms based in the United States, including solar, wind, biofuels and other associated technologies. Since its inception, the ETF has been a volatile one and has swung from big losses to gains quite rapidly. However, under a Clinton presidency, the fund could finally get the spark it needs to succeed. PBW charges 0.60% in expenses. Likewise, the iShares Global Clean Energy ETF (ICLN A-) can be used as a broad play.

Since Clinton intends to install nearly half a billion solar panels, a direct bet on the energy form makes sense. The Guggenheim Solar ETF (TAN B) is the largest ETF dedicated to the renewable source. The fund tracks the MAC Global Solar Energy Index, which is a measure of solar-focused companies from around the world. This includes panel makers, raw materials suppliers, installers and operators of solar farms. TAN’s underlying holdings should see a huge boost as Clinton’s solar plans take hold. Expenses for the ETF run at just 0.70%. With wind energy also being a priority for Clinton, the First Trust ISE Global Wind Energy Index Fund (FAN A+) could be another winner.

Many of the biggest tax breaks and subsidies go towards those owning and operating solar and wind farms. Clinton’s plan would continue to benefit these players. The stocks in the Global X YieldCo Index ETF (YLCO ) could be a huge beneficiary of Clinton’s plans. YieldCo’s own renewable energy assets are under long-term power contracts. Taking advantage of tax savings, YieldCo passes on its cash flows as dividends to investors. For investors, it’s the best way to own the generation side of renewable energy.

When it comes to energy policy, Hillary Clinton’s plans are firmly grounded in renewables. Her aggressive stance towards the sector should help boost stocks and ETFs that focus on these assets. If Hillary wins, these ETFs should do well once her plans are implemented.

Thanks to an increased reliance on technology last year, given the shift to working at home,...

With Record Prices, Is Panning for Gold ETFs The Right Idea?

It’s been a strong year for gold as the precious metal was highly sought after as a safe haven...