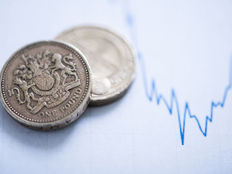 The U.S. election is over and markets all over the globe reacted to an astonishing win by Donald Trump. Although, initially, the U.S. markets along with the dollar appeared quite distressed, both ended Wednesday with healthy gains.

This week will not be entirely about the U.S. election, however. The British pound took first place on the list because Prime Minister Theresa May’s Brexit plans had been upset by a court ruling. Dividend Aristocrats were also popular because of their healthy and stable income stream in times of uncertainty. The presence of precious metals on the list is a sign of investor concern, while the list of 100 ETFs with the lowest expense ratios is proof of their frugality. Check out the previous week’s Trends article here.

The British pound was the most popular asset this week with a 931% surge in popularity, and that was surely not an accident. The battered pound finally started to regain some of the lost ground this week, after a court ruled that Prime Minister Theresa May would have to consult with Parliament before triggering the start of Brexit negotiations. CurrencyShares British Pound Sterling Trust (FXB A-) surged about 2.5% since October 31 on investors’ hopes that May will be prevented from implementing her so-called hard Brexit plan consisting of a focus on immigration at the expense of trade. For more ETFs with exposure to the United Kingdom, use our Country Exposure Tool here.

May is adamant that Brexit negotiations should be triggered in March, but many doubt that would be possible given the ruling. The Supreme Court will reach a final decision in December on whether May could trigger Article 50 by herself, but chances for such an outcome are slim. The Prime Minister could be forced to share her exit plan with Parliament, which will then decide when exactly to start the process. Because Parliament will be in a position to ask for a softer stance on trade, the pound rallied.

May, however, could call early elections next year and win a mandate for her Brexit strategy. Polls show she could easily secure this outcome.

Of all the assets, the U.S. dollar was probably the least expected to gain in the case of a victory by Republican nominee Donald Trump. Yet that was exactly what happened on Wednesday, as markets initially seemed severely distressed and then relieved, probably because of a conciliatory speech by Trump. The U.S. dollar gained 59% more traffic this week, as it rallied about 1.4% over the past five days. On Wednesday, PowerShares DB US Dollar Bullish (UUP A) rose 0.53%, but had been down as much as 1% immediately following the results of the vote.

The markets’ sudden change of heart is impressive. Investors likely chose to focus on market-oriented reforms and infrastructure spending promised by Trump during his campaign, rather than his unpredictability. In addition, the Republicans won both the Senate and the House of Representatives, paving the way for an easy passing of some reforms and possibly a higher government spending bill. Given the low-interest rate environment, taking on more debt to increase spending and cut taxes could provide a boost to the economy and generate inflation. But Trump is not the usual Republican candidate and his unpredictability could cost investors dearly. More volatility could ensue. As the U.S. presidential election continues to influence the global markets, read Election-Resilient ETFs to Buy for investment themes to play regardless of the election result.

In an environment in which everyone is hungry for yield, relatively stable and income generating S&P High Yield Dividend Aristocrats Index (SDY B) is an interesting option. The ETF tracking the index generated 45% traffic in the past week, as the index has risen 3.6% in the past five days. Year-to-date, the index is up as much as 12.8%, while the S&P 500 has risen just 5.8%.

Clearly, investors prefer companies that are part of the old economy, as their relatively stable stock prices and juicy dividends could boost any portfolio, particularly in this low-interest rate environment.

The index contains firms such as Caterpillar (CAT), which rose more than 7% on Wednesday following Trump’s remarks on infrastructure, AT&T (T), a telecommunications firm paying a 5% dividend yield, and Chevron (CVX), which yields 4% annually.

Precious Metals in Demand as Uncertainty Creeps In

Precious metals have seen their traffic increase as much as 43% this week on uncertainty coming from the U.S. presidential election. For example, on Wednesday SPDR Gold Shares (GLD A-) had gained more than 2% following the news of the election results but ended the day slightly down, in a sign investors’ moods shifted from a risk-off to a risk-on approach. A similar pattern could have been observed in iShares Silver Trust (SLV C+), which at some point had increased nearly 3% but finished the day up just 0.4%.

What’s ahead for gold, silver and other precious metals pretty much hinges on the Federal Reserve’s actions. Recent good data in the U.S. could prompt the Fed to raise rates. Yet, it remains unclear how a Trump victory will affect the Fed’s decision. Markets seem undecided. For more on gold investing check out How to Invest in Gold: Physical vs. Miners ETFs.

A list of 100 lowest expense ratio ETFs has taken the fifth spot on our list with a 36% rise in traffic. ETFs from Charles Schwab are among the cheapest to buy from the space, with the absolute leader being Schwab U.S. Broad Market (SCHB A), which has an expense ratio of 0.03%. BlackRock’s iShares are also priced competitively, particularly the ones which track the broader market. Comparing various ETFs by a suite of metrics, including expense ratios, has never been easier with our Head-To-Head ETF Comparison tool. Enter the tickers you want to compare and you will receive all the details about the ETFs presented in an easy-to-understand way.

This week was clearly about the changing political landscape in two of the countries once deemed among the most liberal in the world. While Britain is looking to exit from the European Union and turn inward, the American people voted for less trade and more protectionism. Investors are trying to understand what to make of all of these movements but bid the dollar up when Trump won the U.S. presidency. The British pound gained a little after a court ruled Theresa May needed Parliament’s approval to begin Brexit negotiations. Precious metals trended for their safe-haven appeal in these moments of uncertainty, while the Dividend Aristocrats index was popular for outperforming the broader market since the start of the year and paying a juicy dividend on top of that.