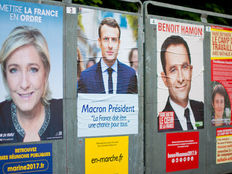 Presidential elections in France have been at the forefront of investors’ concerns this week. The results were encouraging, despite the fact that none of the main parties made it to the second round. Steel has taken the second spot as U.S. President Donald Trump launched an anti-dumping investigation. Cocoa, third on the list, is continuing its downward slide, while short-term bonds are looking attractive in the rising interest environment. Finally, emerging markets bonds close the list.

Read our previous trends edition at Trending: U.S. Drops ‘Mother of All Bombs’ on ISIL Targets in Afghanistan.

European Equities have seen their readership rise 123% this week, as French people headed to the polls. To the relief of many investors, independent candidate Emmanuel Macron won the elections by a slim margin, but he will face runner-up Marine Le Pen, a far-right anti-immigration candidate, in the second round. Le Pen’s chances of winning the French presidency are small, according to the latest polls, which suggest she would win only 40% of the votes on May 7. Aware of the large handicap, Le Pen has started to campaign in force in a bid to close the gap, while Macron has been keeping a low profile.

Markets clearly favor a Macron win. Under his presidency, France would keep its EU membership and be even more open to free trade. He also promised to make market-friendly labor market changes, lower the corporate tax to 25% and reduce the budget deficit. In contrast, Le Pen’s vision for France diverges significantly. For instance, she has promised to hold a referendum on EU membership – as she favors an exit from the bloc – and even a return to the franc. Overall, she would push for protectionist measures that have the potential to not only negatively impact France’s economy, but to also endanger the existence of the EU. For more on the French elections, read Will France Leave the EU Next?

Small wonder then that markets rallied on the results. For example, Vanguard FTSE Europe ETF (VGK A) has jumped nearly 4% over the past five days, extending year-to-date gains to nearly 12%. For more about ways to play the French election via ETFs, read The Best ETFs to Play the French Elections.

Traffic to steel ETFs has risen 118% over the past week, as the Trump administration launched a national-security probe on steel imports. The investigation could be a precursor to slapping tariffs on cheap steel imports. Although it is yet unclear whether a final decision will be favorable to U.S. steel producers, the news was enough to generate a small recovery in the sector. VanEck Vectors Steel (SLX B+), an ETF containing a few U.S. steel companies, has risen 2.36% over the past five days, bringing year-to-date gains into positive territory.

The investigation will broadly focus on whether steel imports pose a national-security threat to the U.S. Trump said the industry is critical for American car manufacturing and military, saying the U.S. cannot rely on foreign countries to fulfill these needs. Commerce Secretary Wilbur Ross, who will run the probe, said Chinese overcapacity and depressed global prices prompted the investigation, adding that current laws were easily skirted by importers and too lax to prevent “dumping,” a practice of selling below the production price.

U.S. steel producers have long complained that it was difficult to compete with their Chinese counterparts, which have received government subsidies. Trump promised to conclude the investigation in two months, at which point his administration will decide on the future course of action.

ETFdb.com has ETF investing guides and other ebooks to help you navigate the investing landscape using ETFs. Sign up to ETFdb.com Pro to get access to all the PDFs located on our ETF Guides page.

Cocoa Continues to Sink on Oversupply

Good news has eluded cocoa lately. The commodity has been in freefall as supplies have exceeded demand. Cocoa’s struggle caught our readers’ attention, increasing its readership by 83% compared to the previous week. iPath Bloomberg Cocoa Subindex Total Return ETN (NIB A+), which has 100% exposure to the commodity, has tumbled about 15.5% over the past 30 days, extending year-to-date losses to 15.7%. This week, cocoa prices have recovered a bit on encouraging demand data from North America, but that did not help to reverse the downward trend.

The International Cocoa Organization (ICO) estimated that supply will outstrip demand by 264,000 tons for the year that began in October. One of the main culprits for the supply glut is the Ivory Coast, the production of which is expected to soar 20% this year compared to last. Globally, production is estimated to increase 15%, while demand is predicted to advance just 2.9%. ICO said this will be the first meaningful surplus in six years.

For a deeper analysis on individual ETF investments such as (NIB A+) or (VGK A), use our ETF Analyzer tool. You can select ETFs by category or type as well as add individual ticker symbols to compare performance, expenses and dividend yield, among other metrics.

Short-term bonds continue to be popular among our readers, as the asset looks attractive in a rising interest environment. Viewership to short-term bonds is up 63% this week compared to last.

Short-term bonds are gaining traction as the reflation trade continues to dominate the market sentiment with the latest tax plan revealed by Trump. The U.S. president wants to cut the corporate tax to 15% from as much as 39% and reduce the repatriation tax to 10% from 35%, among other things. The tax cuts, if implemented, could spur the economy, leading to higher interest rates. Thus, holding short-term bonds now will allow them to deploy capital later at potentially higher rates.

The plan may be hard to implement, however, despite Republicans controlling both the Congress and the Senate. Some Republicans are wary of an increase in the budget deficit needed to finance the tax plan.

Emerging markets bonds have seen their traffic rise about 43% this past week. Corporate and government debt in emerging markets is attractive for its higher yields. A booming global economy should allow many of these countries to easily repay their debt. However, a rising U.S. dollar could pose a threat to emerging markets bonds, particularly in view of the fact that many are increasing borrowings in U.S. dollars. According to Dealogic, emerging markets as a whole doubled their U.S.-dollar denominated debt to $179 billion in the first quarter compared to the same period last year. To easily find ETFs exposed to a particular country, check our ETF Country Exposure tool. Select a specific country and get a list of all the ETFs with exposure to your pick.

Investors were optimistic this week as the results of the French elections and polls showed the country will not fall prey to populism. European equities rallied along with the euro. Steel producers received a glimmer of hope after Trump launched a probe that could possibly lead to tariffs on steel imports. Cocoa prices continue to struggle on an extended supply glut. Short-term bonds are an attractive play in a rising interest environment while emerging markets bonds continue to outperform – although, an appreciating U.S. dollar may pose a threat.