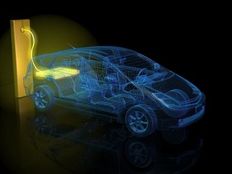 The driverless car revolution is the “next big thing” in tech, so it’s no surprise that the ETF world has jumped on the trend.

The autonomous and electric vehicles are still in their nascent stages, so there’s very little in the way of pure plays in the space. However, that didn’t stop Global X from becoming the third ETF provider to bring a new fund to the market.

The Global X Autonomous & Electric Vehicles ETF (DRIV B) hits the road this week. It looks to invest in companies that are involved in the development or production of the components and technology that go into the AV/EV industry. This may include not only the vehicles themselves, but also the software, batteries and materials that would go into those vehicles. The driverless and electric vehicle industry is in its very early stages, but growth is expected to ramp up quickly over the next couple of decades. It’s estimated that in 2040, more than 50% of new vehicles sold will be electric and that autonomous vehicle sales, according to IHS Markit, will top 33 million.

ETMFs are considered a hybrid between mutual funds and ETFs. They combine the quarterly reporting structure and confidentiality of mutual funds with the tax efficiency of ETFs. In defining value, the fund managers look for companies with low P/E ratios relative to their sector, high yields relative to the overall market, low price-to-book and price-to-cash-flow ratios.

Click here to learn more about ETMFs and their differences with ETFs.

According to the provider, the index targets exchange-listed companies in developed markets that are expected to benefit from the adoption and utilization of robotics and/or artificial intelligence, including companies involved in developing industrial robots and production systems, automated inventory management, unmanned vehicles, voice/image/text recognition, and medical robots or robotic instruments. The underlying index currently has approximately 46% of assets in industrial stocks, 40% in technology stocks and the balance in healthcare stocks.

Some of the economy’s hottest trends – driverless cars, robotics and artificial intelligence – all get some love from the ETF industry. The Autonomous & Electric Vehicles ETF will probably capture the most buzz, but it’s little more than a broad tech ETF at this point in the industry’s life cycle. Leveraged ETFs usually follow successful market trends, so it isn’t surprising that we see the robotics and AI space get the leveraged treatment. The NextShares lineup is up to 17 different funds managing roughly $150 million, demonstrating that there’s a burgeoning market for less traditional hybrid investment products.

Sign up for ETFdb.com Pro and gain access to more than 50 all-ETF model portfolios, each of which is backed by an unique investment thesis.