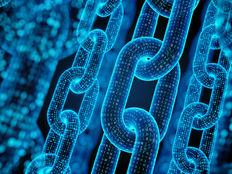 The tech of tomorrow has become a popular place for ETF issuers to look for the next big idea.

Anything to do with robotics, artificial intelligence and other next-generation tech has delivered big returns for investors over the last several quarters. This week, a pair of brand-new tech ETFs, along with several others, aim to deliver some big returns of their own.

The first four blockchain ETFs were all launched within a couple weeks of each other back in January. Things have been relatively quiet until this week when noted cryptocurrency expert and CNBC Fast Money contributor Brian Kelly dropped his own blockchain ETF on the marketplace.

Kelly partnered with REX Shares to launch the REX BKCM ETF (BKC ). It will be actively managed by Kelly himself and looks to invest in public companies deriving revenue from any aspect of the blockchain ecosystem. Following an initial scan of company fundamentals, the fund will sort potential investments into four groups – Wall Street disruptors, crypto miners and traders, enterprise blockchain leaders and decentralized internet leaders. Companies that meet Kelly’s fundamental and investability screens qualify for inclusion. BKC currently has 33 names with nearly 40% of assets committed to just five names, making it the most concentrated of the blockchain ETFs. REX attempted to enter the cryptocurrency space last year when it filed for a pair of bitcoin ETFs, but those applications were later withdrawn.

Global X has one of the most diverse lineups of sector, country and commodity ETFs in the industry. Its tech ETF roster already includes options for investing in AI, robotics, fintech and the internet of things.

The Global X Future Analytics Tech ETF (AIQ B-) is the latest addition to the group and focuses on companies involved in the development and implementation of artificial intelligence and big data. The fund will follow the Indxx Artificial Intelligence & Big Data Index, which targets companies that apply artificial intelligence to their products and services, use artificial-intelligence-as-a-service for big data applications or develop big-data analytics hardware and quantum computing solutions.

High Beta Without the Leverage

Investors who wish to ratchet up their exposure to a particular sector of the market are often left looking to leveraged products. Leverage is expensive, though, and futures contracts can decay in value quickly, so Salt Financial developed the Salt truBeta High Exposure ETF (SLT B+) to try to bring investors the benefits of high beta without the use of leverage.

The fund starts with the 500 largest stocks and assigns a “truBeta” score based on its level of risk and projected beta. It then takes the 100 stocks with the highest scores and equal-weights them. Essentially targeting the most volatile large-caps, the fund currently has 29% of assets in tech, 23% in financials and 16% in energy.

The Virtus InfraCap U.S. Preferred Stock ETF (PFFA B-) is the 13th fund launched by the group and the second focused on the preferred space. It is an actively managed fund that will target over 100 preferred securities issued by U.S. companies with market capitalizations of over $100 million.

In its strategy, the fund looks for preferred securities that offer the potential for attractive yields and determines its security selection and weightings based on a variety of quantitative, qualitative, and relative valuation factors. It can also use a modest degree of leverage to enhance portfolio beta.

First Trust operates a number of ETFs using the Dorsey Wright relative strength ranking methodology. The First Trust Dorsey Wright DALI 1 ETF (DALI C+) debuts this week, applying that strategy using four broad asset classes: domestic equity, international equity, fixed income and commodities. On a biweekly basis, a relative strength composite score for each market segment is calculated, and the asset class with the highest relative strength score is selected for inclusion in the index. The fund’s assets are then allocated among certain ETFs that provide exposure to the asset class. DALI is an acronym for dynamic asset level investing.

The Credit Suisse FI Enhanced Europe 50 ETN (FEUL C+) is the latest ETF developed by Fisher Investments and looks to deliver double the return of the STOXX Europe 50 Index, an index that represents 50 of the largest companies within the broader STOXX 600 Index. The leverage factor resets on a quarterly basis.

The latest blockchain ETF is notable since it has such a recognizable industry name running the portfolio. The initial wave of blockchain enthusiasm has waned a bit, so it will be worth keeping an eye on it to see if Kelly’s name alone can attract attention. On the other hand, the Global X Future Analytics Tech ETF could be facing an uphill battle as the PureFunds ISE Big Data ETF shuttered last year due to lack of interest.