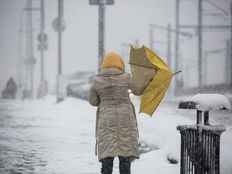 Warren Buffett’s Berkshire Hathaway got its first piece of negative news this month on its recent investment in airline stocks, as these traded down due to flight delays caused by stormy weather. Airlines took first place on the list this week, followed by Israel and India. Israel trended because of a surprise takeover announcement, while India was popular for its recent state elections. Emerging market bonds and aerospace & defense equities closed the list.

Check our previous edition at Trending: South Korea in Spotlight as President Park is Ousted

Airlines have trended the most this week, seeing their viewership jump 129% compared to a week ago. However, it was for the wrong reasons. Stormy weather in the northeast of the U.S. was responsible for many delayed and canceled flights, something that inevitably is expected to hurt the bottom lines of U.S. carriers. US Global Jets (JETS C+), an ETF containing four of the biggest U.S. airlines, has dropped nearly 6% over the past 30 days, bringing year-to-date performance into negative territory to 1.5%.

According to FlightAware, a data services firm tracking flight cancellations, as many as 7,500 flights were canceled or delayed on March 14. Some of the flights have been rescheduled, but others have been completely canceled and the revenue was lost. This news should displease Berkshire Hathaway, which recently unveiled a monster $10 billion investment scattered across four of the U.S.’ largest airlines, namely Delta Airlines (DAL), American Airlines (AAL), United Continental Holdings (UAL) and Southwest Airlines (LUV).

For more on this, read Trending: Airlines Gain Momentum as Berkshire Unexpectedly Buys Into the Industry.

Stella is not the only worry for carriers. Airline companies have warned that rising oil prices may hurt profitability. Fuel has constituted 19% of airlines’ operating costs in 2016 and is forecasted to make up 18.7% in 2017, according to the International Air Transport Association (IATA). In 2014 and previously, fuel accounted for more than 30% of operating costs.

It is rare for a country to trend just because of a large transaction, but that’s exactly what happened with Israel, which saw its viewership rise 81% this week. The small country garnered attention from investors after Mobileye, a provider of autonomous driving solutions, sold itself to Intel (INTC) for $15 billion, representing a 30% premium. The announcement propelled iShares MSCI Israel Capped (EIS B) higher by nearly 4% on March 10 but, since then, the ETF has given up some gains. Mobileye makes up about 6% of (EIS B).

To easily find ETFs exposed to a particular country, check our ETF Country Exposure tool. Select a specific country and get a list of all the ETFs with exposure to your pick.

The $15 billion deal is the largest ever for a company chiefly focused on the autonomous driving sector, signaling increasing competition between growth-hungry technology juggernauts. The transaction is on track to close within the next nine months and is expected to boost Intel’s earnings per share. While Mobileye helped (EIS B) post strong results lately, Teva Pharmaceutical Industries (TEVA) proved a drag. The company, which makes up about a fifth of the Israeli-focused ETF, has seen its shares fall more than 10% since the beginning of the year, largely due to fears that Donald Trump’s administration will crack down on drug prices by encouraging competition for government contracts.

India has experienced 64% more traffic this week, taking third place on the list. Much of the fuss was about the Indian state elections, in which Prime Minister Narendra Modi comfortably emerged as a winner. Shares rallied on March 14 after the election results were published for Uttar Pradesh, the most strategic state, but subsequently have given up some gains. Over the past five days, iShares MSCI India (INDA C+) has dropped 1.5%, but year-to-date the ETF is still up 15%.

Investors cheered Modi’s comfortable victory, as Indian people gave him a vote of confidence in his reforms. Modi’s most dramatic move so far was to ban 86% of the banknotes in circulation to crack down on corruption. It is expected that Modi will continue with his business-friendly reforms, including the implementation of a national sales tax. ETF Database has ETF investing guides and other ebooks to help you navigate the investing landscape using ETFs. Sign up to ETF Database Pro to get access to all the PDFs located on our ETF Guides page.

Emerging markets bonds have seen their viewership advance 48% this past week, as investors are attempting to assess their performance in a rising interest rate environment. Although usually emerging market bonds are among the first to take a hit when interest rates go up in the U.S., their performance is not bad all the time. At least for now, emerging markets bonds stand their ground. iShares JPMorgan USD Emerging Markets Bond (EMB A-) has risen slightly over the past days and is up 2.8% since the beginning of the year. For a deeper analysis on individual ETF investments such as (EMB A-) or (EIS B), use our ETF Analyzer tool. You can select ETFs by category or type as well as add individual ticker symbols to compare performance, expenses, and dividend yield among other metrics.

Evidently, emerging markets overall are better prepared for higher rates in the U.S. History shows that countries with good fundamentals were mostly able to withstand the hiking storm.

Aerospace and defense stocks trended again this week as U.S. President Donald Trump reiterated his calls on fellow NATO allies to increase defense spending to 2% of GDP. iShares US Aerospace & Defense (ITA B+) has rallied nearly 6% year-to-date on prospects of increased military spending in the U.S. and abroad. Over the past five days, however, (ITA B+) has dropped about 1.7%.

Trump recently suggested Germany and other NATO members owe money to the U.S. and should increase their defense budgets. Although Germany rebuffed claims that it owes money to NATO, it indicated a gradual increase of its defense budget towards the 2% target in the coming years. Other non-complying countries have signaled the same thing. Of the bloc’s 25 members, only five spend 2% or more – the U.S., Greece, Poland, Estonia and the U.K.

But the 2% target is not mandatory, as former U.S. ambassador to NATO Ivo Daalder explained in a tweet. Each nation decides for itself how much it wants to spend on defense, Daalder said.

This week, airline stocks were hit by winter storm Stella, as many flights were delayed or canceled in the northeast of the U.S. The second position was taken by Israel, which trended because Mobileye, an autonomous driving company, sold itself to Intel for $15 billion. Investors in Indian equities cheered Prime Minister Modi’s stunning victory in state elections while emerging market bonds remained resilient despite Federal Reserve recently hiking interest rates. Aerospace and defense stocks took the last position, as President Trump and German policymakers sparred over the defense budgets.