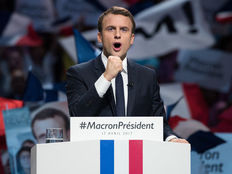 The Best ETFs to Play the French Election
Share

French voters backed Emmanuel Macron over Marine Le Pen in convincing numbers Sunday, capping off an unprecedented campaign that revealed deep divisions among France’s electorate. Although the election result averted an imminent European crisis, Le Pen’s ascendancy from fringe candidate to presidential threat gives her platform strong momentum over the next five years. This suggests that the rise of populism is far from over.

Centrist Emmanuel Macron secured 65.8% of the vote in the second round of France’s presidential election Sunday. Marine Le Pen, who abandoned her National Front party two weeks ago to appeal to a wider audience, earned just 34.2% of the ballot. The result reflected a series of public opinion polls conducted by Ipsos, Ifop and BVA that gave the clear advantage to Macron.

Macron and Le Pen emerged as Nos. 1 and 2, respectively, in the first round of voting April 23, edging out Republican Francois Fillon and communist-backed Jean-Luc Melenchon in an unprecedented four-way contest. Under France’s electoral system, a candidate has two rounds to secure a majority and be declared president. Should no majority mandate emerge in round one, a second-round runoff is held two weeks later between the top-two vote getters.

Turnout declined sharply in the second round, a sign that many backers of third parties abstained from the contest. A turnout of 65.3% was confirmed by French authorities, lower than both the first round and the 2012 runoff.

Impact of Election on France’s Economy

Macron and Le Pen each campaigned on a pro-business platform, but diverged sharply on their vision of the future. Whereas Le Pen focused on protecting French industries from globalization and unfair competition, Macron sought to strengthen pan-European integration through reform. France’s new president has also been described as market friendly for his desire to cut taxes, reform the public sector and promote industries of the future.

At the same time, Macron has vowed to liberalize labor laws and adopt a Nordic-style economic model that includes government spending cuts and the implementation of a stimulus package.

Macron’s election victory is unlikely to spur faster growth in the French economy over the short term, but could position the country for a strong rebound in the coming years. The liberalization of labor laws, combined with investment in a future-looking economy, could help France overcome its struggle with double-digit employment. Continued membership of both the EU and the euro will also make France a prime destination for foreign investment and tourism.

Macron’s impact on the financial markets will be much swifter. For investors, he was the candidate of choice to maintain both stability and confidence in the EU. As round one clearly demonstrated, a pro-Macron election result is a boon to equities and the euro. This is true both in the short and long terms, as investors have already begun pivoting toward Europe amid faster economic growth and a broad recovery in corporate profits.

ETFdb.com will have an in-depth analysis of the French election results in our upcoming May ETF Edge Newsletter, including which ETFs were impacted and how to navigate this geopolitical risk in 2017. Signing up for the ETF Edge will give you the latest insights on all the major portfolio-moving developments from around the world.

Implications for Rest of Europe

Like the Dutch election before it, the outcome of France’s presidential race was closely watched across Europe, given its direct implications on the European Union (EU). For many, a victory for Le Pen would have marked France’s first official pivot away from the EU, putting the country on a clear path toward Frexit.

Le Pen’s campaign included exiting the EU, withdrawing France from the euro and restricting immigration to a few thousand people each year. Each of these pledges ran contrary to pan-European ideals, setting the stage for a potential clash with Brussels.

Le Pen’s defeat could also serve as a swift blow to other anti-EU parties throughout the region, especially in Germany, where the nationalist Alternative for Germany (AfD) has already made strong inroads in local elections.

With Macron set to enter the Elysee Palace, the chances of Frexit have diminished significantly. France’s continued membership of the EU is positive from an investment perspective since EU integration shores up stability and confidence in the region. It is also positive for EU migrants who reside in the country and for domestic companies with exposure to the single market.

On the downside, however, this status quo will leave a huge swathe of the French electorate dissatisfied. This could lead to an even bigger backlash in the 2022 election, especially if France’s security situation deteriorates further.

To keep a pulse on populism from an investment perspective, bookmark our Trump’s Victory page. Also, be sure to follow ETF Database to explore how the Brexit narrative plays out. The United Kingdom filed divorce papers from the European Union on March 29, 2017. Read UK’s Path to Leaving the EU to find out more.

Macron’s victory likely signals a brighter outlook for European equities and the euro. This means France’s CAC 40 Index has further to go. The index skyrocketed to 14-year highs following the initial round of voting and could be poised for stronger gains in the short term. With 15% exposure to French markets, the Vanguard FTSE Europe ETF (VGK A) is a good option for investors looking to play the post-election rebound.

Expectations of France’s continued membership of the euro also bodes well for equities operating in the currency region. The State Street SPDR Euro STOXX 50 ETF (FEZ B+) offers strong exposure to the region’s most prominent large-cap companies, including a broad cross-section of financials, industrials and consumer stocks.

Investors looking to bet on a strong performance of the euro relative to the dollar will also find opportunity in the ProShares Ultra Euro ETF (ULE B+). The euro soared to six-month highs against the dollar following the first round of voting.

For a list of ETFs to play the French election, visit our French Elections 2017 market catalyst page.

Utilize ETFdb.com’s ETF Screener tool to filter through the entire ETF universe including European Equities by dozens of criteria such as asset class, sector, region, expense ratio and historical performance.

The outcome of France’s presidential election may have averted an imminent EU crisis, but the flames of populism are fanning across the region. Italy could be the next test of populism as the country heads for a snap election as soon as this year as the fallout from the December 2016 referendum continues. Bookmark our Italy EU Exit market catalyst page for ETFs to play if Italy stays or leaves the EU in the coming years.

Get Risk-Managed Exposure to Innovation With DFNV